The time had come to commence work on the balloon.

Firstly we needed materials. That wasn’t a problem, however, because we were certainly not picky. We used a lining-fabric for leatherwear because we could obtain it in sufficient quantities.
The sewing thread we used was also for leather work and therefore sufficiently strong.

Since neither of us had any idea what to consider in the construction of a balloon, our next steps were quite amateurish. We did not know how large a hot air balloon ought to be so we simply estimated its size it based on pictures we had seen. We settled finally on 1,800m³.

We next had to consider how to cut the individual strips of fabric as the balloon needed to appear round when viewed from the side. It was immediately clear to me that cutting each piece of the balloon envelope into a round shape would be too costly and wasteful. I therefore decided on another variation which was successful and used also for subsequent balloons. In this manner the strips simply needed to be diagonally cut at alternate ends which the following drawing shows:

In this manner the amount of waste material was kept very low and we could use virtually all of our stock. The next step involved piecing the strips together:

The individual strips needed only to be sewn together for the balloon to take shape. Theoretically the balloon when viewed from the side would not have appeared round but due to the fabric bending when inflated, it took the shape of a typical balloon.

Now the the plan was ready I could sit myself at the sewing machine and get stitching. I used my mother-in-law’s GRITZNER which was already very old but very reliable. It had to be because I used a double-fold stitch with thread normally meant for leather. This placed the machine under a great deal of strain.

The next picture shows a friend of ours who was visiting us from the West and whom we had shown the balloon. We had also informed him of our plans.
There was a reason for this.

We were relatively certain that the Stasi would not bust us but it was not something we could completely rule out either. Anyone who lived in East Germany can understand what would then happen. We would have been locked up and no one from our circle of friends or family would have any idea what had become of us.

We therefore have these two pictures and the information to our friend so that if we did disappear, the authorities in West Germany could be informed. 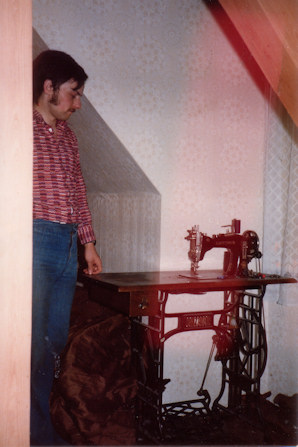 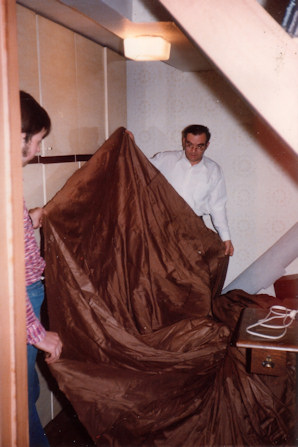 In addition to all of this we needed a burner and we had no idea about his either. It was clear to me that it needed to be a propane gas fired burner. I took a section of stove pipe with around 12cm diameter, connected it to the gas cylinder, turned it on and held a match to it. It worked; the flame burned cleanly and its size could be controlled accurately with the cylinder valve.

We therefore built a burner according to this principle. We connected it to a hose and equipped it with a valve and purpose built nozzles. What came forth from this burner was not just a flame but pure Hell-fire and our 11kg of gas was used up in no time at all. 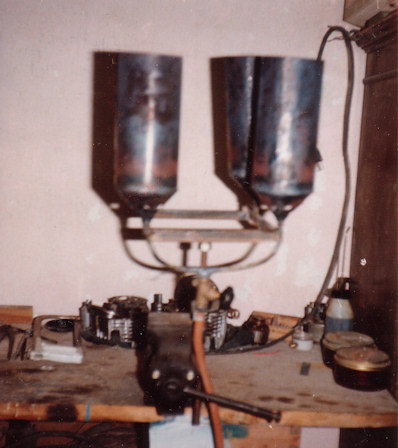 Now we needed something in which to travel. “Real hot-air balloon pilots” use woven baskets for this purpose but we did not have one and it was not possible for us to build one either.

We therefore decided on a different variation. Using angle steel dating from the 40’s we welded a 1.4m x 1.4m square frame together and screwed on a plastic-coated metal sheet with a thickness of 0.8mm. Flat steel bars were fixed in the corners with hooks at the top from which the balloon ropes would be attached. In order to stop us from falling off this platform or “pod” as we had called it, holes were drilled through the flat steel bars and 5 washing lines were threaded through. These served as guardrails.

After finishing this important component we did, quite naturally, want to test our balloon. To do this we went to a forest clearing near Ziegenrück after midnight on 28th April 1978. We had previously cased out this clearing and then made an attempt there to inflate our balloon with hot air. 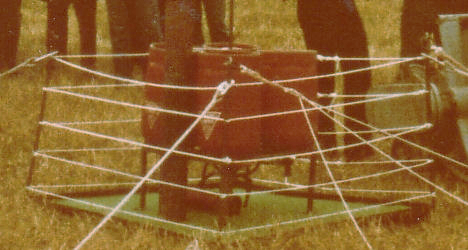 We wanted to do so without the use of a fan, a technique we had seen on television in the meantime. Our wives held the opening of the balloon up so that we could warm the air at the balloon’s opening using the flame. The rising and falling of the air (convection) was supposed to urge the air further into the balloon but this was unfortunately not the case. After several further unsuccessful attempts we abandoned this methodology.

The idea then came to us to suspend the balloon from a higher structure and simply inflate it from below with hot air.

We knew that there was a railway bridge near the forest clearing where we had made our original attempts. It was a bridge made from steel girders and we determined that it would be easy for someone to climb to the top and in doing so hoist up the balloon. We travelled, again in the dead of night, to this bridge but found out that we had to cross a stream in order to reach it. The town of Ziegenrück was also very close by so we therefore decided to abandon this attempt.

It had become clear to us in the meantime that air escaping through the balloon’s material was the problem. We therefore tried in the next attempt to airproof the balloon in order to slow the rate at which the hot air escaped through. After a great deal of effort and experimentation we found the solution to be soaking the upper portion of the balloon with proofing chemical but we weren’t altogether satisfied with this solution either. The balloon became even heavier and the material stuck together. It was clear that we would not be able to airproof the entire balloon.

With this partially airproofed balloon envelope we wanted to make another attempt. We stayed with the idea of suspending the balloon in order to inflate it and selected a stone quarry in Döritz as our launching site. I knew it well from my time as a driver. We thought the balloon envelope needed only to be dragged up the steep rock face and could then simply be inflated from below using the burner. It was a moonlit night and the conditions required for our attempt were optimal. Unfortunately this attempt was yet another one amounting to nothing. After spreading out the balloon in order to pull it up the rock face, Peter suddenly saw a shadow and we had to assume we were being watched. We very hastily packed the balloon back into the trailer and left as quick as we could. However, nothing happened in our journey with the trailer so we decided to stop and check it. Our balloon was hanging out by about five metres with its upper area torn into shreds.

At this point we had to admit to ourselves that we would not make any more progress with this balloon. Peter subsequently burnt it in his boiler in order to completely destroy all traces of it.

Our original plan was to travel into Czechoslovakia and launch our escape from there. For this purpose I had reserved a rental truck with Kraftverkehr Pößneck for the end of May. This second vehicle would be necessary to enable all of our equipment to be transported.

Compared to today it was not possible back then to simply show up and rent a vehicle. One had to book long in advance and this was no different for even for taxis. As a result of this and our balloon which had now ceased to exist, I had the pleasure for a week of driving around the neighbourhood completely aimlessly in a relatively new Moskwitsch 412!

Whilst on this subject I must mention that I had intended to start my own taxi firm. This proposal was, however, rejected since the demand for taxis was already covered by Kraftverkehr Pößneck.

How our journey continued is described in Kapitel “The second Ballon”..