The third balloon brought us finally to freedom!

On 27th July 1979 the decision was made – we would once again be working together. The question for my wife Petra and I was not whether we would be found but when. Since I did not have enough time to devote to our plans I went to my doctor on 13th August complaining of stomach trouble so that I would signed off as sick. I had already set aside the period from 27th August until 16th September as leave which freed up 5 weeks in total for me to work on the balloon.

We learned on 14th August that my fears were indeed justified when I opened the Volkswacht, our daily newspaper. 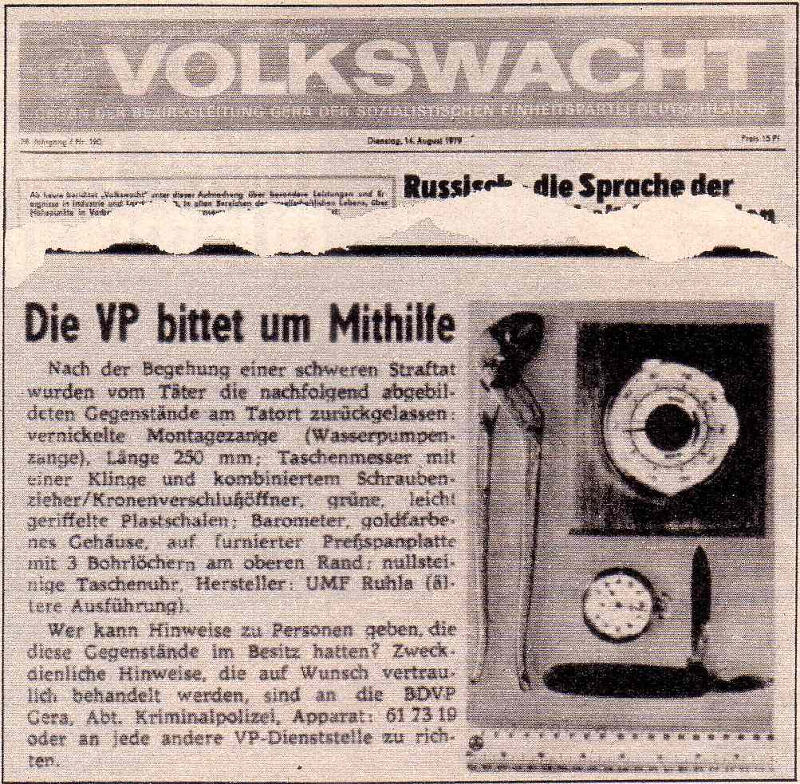 The Volkspolizei (VP)† Need Your Help!

The following items (see picture) were left at the crime scene by the perpetrator of a serious offence:
Nickel pliers (water pump pliers) – length 250mm; Penknife with a blade and combined screwdriver/bottle opener; green, lightly grooved plastic tubs; Barometer with gold coloured housing, on veneered chipboard with 3 drilled holes on the upper edge; pocket watch, manufacturer UMF Ruhla (older model).
Who can provide details about persons in the possession of these items? Pertinent details, which will be treated in confidence if requested, are to be directed to the BDVP Gera Criminal Police Department Tel 61 73 19 or any other VP station.

This article showed that they were looking for us. Were they wanting to make us fearful by publishing this article or was it due to the fact that they had no leads to follow? I believed that the latter scenario was the case because the Stasi would not have published an article of this kind for no good reason and furthermore, these items could have belonged to anyone. They were every day items which could be bought anywhere.

Yet, this much was clear … we had to get a move on!

Since the balloon had to be larger than the previous ones, I deliberately designed it to be oversized, working on the basis that it would be 4200 cubic meters. This of course meant that we would need more material than before and I calculated that we would need about 1300 square metres (see the Balloon Calculator). With the greater amount of material we also knew that the balloon’s weight would increase and that we would therefore need to use lighter materials if at all possible. We had already tested various fabrics before building the second balloon and were able to leverage off this experience. We decided again on what were previously our favourites i.e. umbrella fabric, tent nylon and taffeta. We again considered bed linen but would only have used it as a last resort as it was considerably heavier than the others.

We were also acutely aware that it would not be as easy this time to acquire the materials. The balloon featured in the newspaper had been found as a result of a failed launch and we feared that the shops selling the material would need to report large purchases. For this reason we purchased only small quantities of fabric at a time. In spite of this an uneasiness had crept up on us and we feared that we could be caught as a result of such purchases. However, since we had no other choice but to press on we did it anyway. Fear had gripped us from the beginning which led us to over exaggerate the significance of otherwise trifling incidents. In one shop in Saalfeld a sales assistant was surprised that two men wanted to buy 100m of taffeta and asked us to wait whilst she prepared and cut it. We were overcome with fear and considered leaving but we didn’t and waited patiently for her to come back with the fabric. During the journey home we looked around constantly and were worried about whether anyone was following. Even after arriving home this fear persisted and it took quite some time before we were satisfied that all had gone well.

We had a similar experience whilst driving in Halle an der Saale. As we approached a street crossing a police officer suddenly appeared and stopped us. In this moment we were absolutely convinced that our number was up. Luckily that was not so, we had simply driven the wrong way down a one way street. After we had paid 5 Marks we could continue on our way without further incident. This event is actually of no consequence or significance at all but I will never forget it.

Since the balloon still needed to be built I stayed at home a week later and began work. I was supported by Frank, the Strelzyks’ elder son who helped me with cutting the fabric and with the sewing. Peter, Doris and my wife Petra were still shopping for more material because the purchases from the previous week had not remotely sufficed. It became ever more difficult to acquire the correct materials in the required quantities and therefore the distances they had to travel increased accordingly. Eventually they travelled all over East Germany, up as far as Rostock and Schwerin. In the end we had to use larger quantities of bed linen as the other fabrics were sold out Fortunately I had plenty of fabric to work with most of the time and the balloon’s construction progressed. However, time wore on and the end of my leave from work was upon us. We could not be sure that we would finish the work in the time we had left. It became clear that we needed to consider how the work would continue thereafter. I had already received a notification regarding my military medical examination and that meant that I would have had to start my army service at the beginning of November. We had decided in this scenario that the others would have continued with the plan and I would have stayed behind. I would have been imprisoned and I had already taken this on board. The hope was that the Strelzyks and my wife Petra would have then worked from within the West to attain my freedom.

Fortunately however, it all turned out differently. We could assume that the balloon would be completed before the end of the holiday and all we needed then were good weather conditions. That did not happen though and we had to accept that everything would be delayed. On Friday 14th September I therefore went to my employer Kraftverkehr Pößneck and picked up the driving job for the following Monday as the holiday was now over. I also continued to work on the balloon which was still unfinished. Saturday brought us a big surprise though when a sudden change in the weather occurred. A front had passed through leaving behind stable conditions and a developing northerly wind. That was what we had been waiting for all along and pinning our hopes on. I then hurried to get the balloon ready by the evening and at 10pm it was finished but in the rush to get it done I made a mistake which could have been our undoing.

I had merged the twelve ropes onto which the basket would be fixed through the dome of the balloon and tied them all together with a knot. The seams of the fabric also merged at the same position but they were not of the same lengths. This caused a hole to form. Since this hole was not large I did not see it as a problem. I simply made a cover from some surplus material, placed it over the hole and sewed it onto the balloon. With that, the balloon was now finished and ready for use. We already had the rest of the gear e.g. the burner and fan from our previous attempts and we had been building the basket in the meantime; that had become old hat by now.

To check whether the wind really was ideal we drove up to Bahrener Höhe. We chose this spot because it was the highest hill near Pößneck and determined there that the wind was perfect for our plans.

Now we were ready and could get going! Next: The escape

† - The Volkspolizei (lit. “People’s Police”) were the national police force in East Germany commonly referred to as the “VP” for short.