The second balloon was finally functional!

Based on our experiences with the first balloon it was clear to us that several problems needed to be solved if we wanted success.

The most obvious problem was the porosity† of the material we were using but we also did not know what size the balloon ought to be. This we had simply estimated based on pictures.

In order to find an appropriate material for our plans I built a device for measuring the porosity of different materials. This measuring device consisted of a cube made from sheet-metal with the dimensions 10cm x 10cm x 10cm and one open side. On the side directly opposite the open one I made an opening to which a vacuum cleaner hose could be attached. The vacuum cleaner was a run-of-the-mill appliance which I connected to a conventional transformer in order to vary the speed of the cleaner’s motor as required. This enabled me to change the air pressure in the hose, and in turn, the cube. I also built a connection socket on the cube to which the measuring device could be attached thus enabling the air pressure in the cube to be measured. The measuring device consisted of a U shaped glass tube filled with water. The lower air pressure in the cube compared to the pressure outside caused the column of water to rise on one side. This enabled us to actually see various differences in air pressure depending on how high the column of water rose.

All that needed to be done now was for fabric to be spread across the open end of the cube, the vacuum cleaner switched on and we could then determine the porosity of the material based on the displacement of the water column. The more the water column rose, the less porous the material. The greater the pressure difference between the interior of the cube and the outside, the more airtight the material.

Using this approach we narrowed down the choice of materials to a few. The most ideal for our plans were umbrella-fabric and tent nylon because these were the lightest and least porous. We also considered the clothing fabric taffeta. This material is very air-tight but heavier than the others and not as resilient to the elements. A fourth possibility was bed linen which whilst just as airtight as the other materials was significantly heavier. It would not be our first choice but we would have used it if necessary.

Our next step was to determine the required size of the balloon. Physics and technology had always been my hobbies and I had a Brockhaus Physics Lexicon and a Syllabus for Gasfitters at home from which I gained lots of information about engineering thermodynamics and the effects of temperature changes on the behaviour of air. In these I found the proper formula for our plans. It did not consist of an elaborate or specific formula for balloons, rather a simple gas equation which one simply had to know.

The most important criteria for the construction of the balloon had now been addressed. In order not to draw attention to ourselves and with the hope of obtaining a large quantity of material from a large store we travelled to the Konument-Kaufhaus in Leipzig at the beginning of June.
One of our materials of choice, taffeta was actually in stock and we were able to obtain the necessary 900 m2. In order to appear credible we had introduced ourselves as engineers from the Hohenwartetalsperre‡ sailing club and explained that we required the materials to make sails. They bought our story and we experienced no problems at all.
However, we had made our first big mistake here which could easily have been our undoing. We paid for part of our materials by cheque.

The construction of the balloon then went full speed ahead. We were able to work on without much interruption because in building the first balloon we had already determined the most efficient way of sewing. Since the entire length of fabric was constantly fed through the sewing machine I was unable to do this alone. My wife Petra, Peter and Doris Strelzyk therefore took it in turns along with myself to hold the material and guide it through.

The fundamental changes made with the second balloon were increasing its capacity from 1800m3 to 2200m3 and reducing the number of ropes connecting it to the basket. The first balloon had a rope weaved in to each of its 48 seams. These served to stabilise the basket and ran all the way up the envelope of the balloon in order to spread the load evenly over its surface. These ropes consisted of nylon cord with a diameter of 3mm which could be used as tent guy-ropes for example. However, constructing in this manner led to them tangling when folding the balloon and they needed to be unravelled constantly. For this reason I sewed a rope into every fourth seam with the new balloon and used nylon washing lines with a diameter of 7mm. These ropes ran up to a height of around 5m and were sewn into the fabric.

Whilst we could make good progress in sewing the new balloon, it became more and more physically tiring operating the sewing machine with the foot pedal. It meant that I had to take frequent breaks. This problem had a very straightforward solution because motors were available for purchase which could be built on to any sewing machine. I did this and the work was made considerably easier. After just under 2 weeks the balloon was ready and we could once again begin the tests.

In order to be completely certain that we would not be discovered carrying out our tests we sought out a new forest clearing. This clearing is situated between Liebschütz and Ziegenrück and borders onto a rather precipitous slope in the direction of the Saal valley. It also had only one road leading to it. We could therefore be certain that the clearing could only be reached from this single road which made everything simple. To ensure we could carry out the tests undisturbed and that a ranger wasn’t doing his rounds either Peter or I would travel to the clearing at around 6pm and wait in a raised hide for the other to arrive at around midnight. We were satisfied that if no ranger had been observed up until this point, there wouldn’t be one coming for the next two hours.

The initial attempt to inflate our new balloon was made in the same way as with the first. Our wives held the opening of the envelope and Peter and I took turns to heat the air with a burner. We reasoned that the flapping of the opening would urge the hot air into the body of the balloon. Unfortunately this did not happen as we had imagined and we once again had to concede that this approach would not serve us.

The next logical realisation was that we needed a blower. We could rule out using any that were already available e.g. from farms because they were too heavy and would also require electricity to power them.

Once again I had an idea. I attached the engine from my motorcycle, a 250cc MZ with an output of 14 horse power. All unnecessary components were removed so that only the crankcase with cylinders and pistons, clutch end plate and ignition system remained. 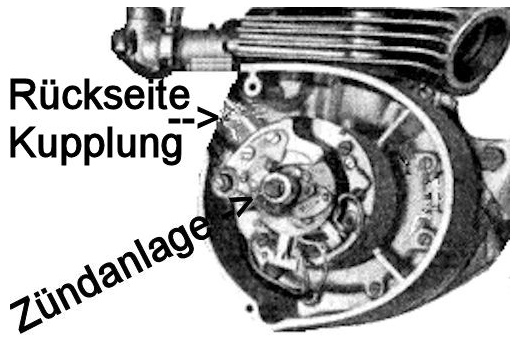 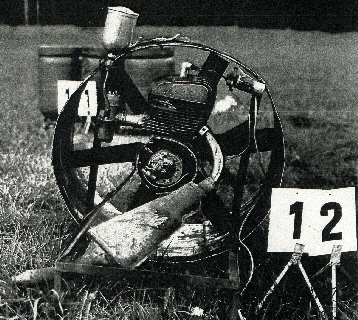 I screwed six 40cm set metal fins onto the end plate of the clutch and fixed it into a frame and special housing for the propeller. An exhaust from my Wartburg car was then built on to reduce unnecessary noise and our blower was ready for use.

Operation was somewhat arduous because we had to start the motor by moving the propeller by hand but since I had adjusted the carburettor and ignition in the most optimum way possible that was also no great difficulty. The engine rotated with 3,000 revolutions per minute and produced a good airflow.

Our next attempt was a complete success. A few minutes after starting the blower and with the support of the burner, the balloon was fully inflated and the ropes were taut. We had taken care to anchor the basket in the ground to ensure that the balloon could not take off.

Words can hardly describe what we felt in this moment; we were simply overwhelmed by the spectacle before us. We walked around the balloon and were certain that this glowing ball of fire would bring us to the West.

But, this euphoria turned out to be very short lived. After inflating the balloon the burner’s flame soon became much smaller. The fast rate at which the gas left the cylinders caused the liquefied gas remaining in them to cool a great deal and diminished the rate at which the liquid propane turned into actual gas. The performance of the burner therefore became worse and worse with time and barely kept the balloon inflated.

A whole host of attempts followed to improve the performance of the burner. We used 4 gas cylinders instead of one to reduce the exit rate for each individual cylinder. In this manner we were able to slow the cooling of the cylinders but were unfortunately unable to eliminate it entirely. In the next step we abandoned the use of our four-pipe burner and instead used a burner with only one but this didn’t provide a lasting solution either.

Due to our lack of progress with propane, we had the idea of using petrol for the burner. I used a compressed air tank from a W 50 truck and this ought to have been the solution. We constructed a frame in which the tank could sit vertically and built an uptake pipe onto the side connection. We then filled the tank with petrol and put it under pressure using a foot pump. The pressure would drive the fuel out of the tank and on to the burner through the uptake pipe. The burner did in fact produce a flame but due to the inadequate pressure in the tank its performance was not strong enough.

Even now when I think about what we did next it sends a shiver down my spine. The breakthrough idea was oxygen. We fed the fuel with oxygen as it emerged from the tank by means of an auxiliary jet. That would have been OK but the pressure in the tank holding the fuel was not sufficient due to our use of a regular foot pump. We therefore decided to put the fuel under pressure using pure oxygen. One can imagine how this combination of fuel and oxygen would have behaved and what terrible things could occur. Fortunately, nothing dramatic happened and the flame reached a height equivalent to a three storey house.

Should anyone have spoken to us we would have explained that we were testing a home made burner for a central heating boiler. The performance of this boiler would in fact have been sufficient but the whole apparatus was too unwieldy for powering a hot-air balloon.

Our experiences with these attempts led me more and more to the belief that we would simply not get anywhere. The lack of an adequate burner, doubts as to whether the balloon’s size was sufficient and other attendant circumstances led Petra and I to the decision to withdraw from the project entirely. I was of the mind that we would not get anywhere with this balloon and that I would find another way to leave East Germany.

More detail is recounted in the next chapter “Our Withdrawal”.

The Hohenwartetalsperre is a large man-made lake in the German region of Thuringia surrounded by high hills.