The Night of the Escape

The balloon was finally ready but this time we were unable to test it. It was extremely unlikely that we would have the same opportunity again that these optimum weather conditions offered, so we decided to risk an escape attempt.

We got underway shortly after midnight. Peter Strelzyk, his wife Doris, his son Andreas and my wife Petra with our sons Peter and Andreas went in the Strezlyks’ Wartburg car. My own Wartburg was not roadworthy or functional so the Strelkyks’ eldest son Frank and I travelled on my moped “Java Mustang”. We experienced our first problems during this journey. The moped’s motor tended to stall when working at its hardest because the pistons in the cylinder would jam under the heat strain. This wasn’t a surprise to me and indeed it wasn’t the first time it had happened either, but in this situation it frustrated us terribly as it happened more than once. In spite of these difficulties we managed to arrive at the launch site at around 1am.

We then allowed ourselves plenty of time before setting up the balloon. In order to be sure that no one had followed us we were very quiet and monitored the area around us carefully which was easily possible due to the full moon. After we were satisfied that everything was OK we started to set things up at around 1:30am. We unloaded everything from the trailer and the boot†. After doing this we assembled the basket, mounted the burner and anchored it all to the ground using four ropes. The balloon envelope was also unfolded, attached to the basket and laid out ready to be inflated. In order to conserve gas for the journey we also had a second burner with three gas cylinders. This was so that we could preheat the air duration inflation and to have the air in the balloon heated up by the time we were ready for takeoff. We then placed the blower at the balloon’s opening and our preparations were finally complete.

Up until this point everything had proceeded rather slowly because we had worked very quietly and carefully but before we could launch the balloon it was necessary to make some noise. Our thorough preparation meant we only had to do that for a very short period of time. I fired up the blower and got the inflation of the balloon started. The device had six blades and a diameter of 80cm which produced a superb airflow; the balloon was fully inflated within five minutes. Peter heated the air with the burner as it went in which accelerated the inflation and enabled the balloon to stand upright at the same time. Inflation was complete and we could shut the blower off. We were in a forest clearing and the air was virtually dead calm causing the balloon to stand fully inflated and motionless above the basket. It was now ready! Petra quickly got our sons Peter and Andreas out of the car as he had fallen asleep and with that we were ready to get in. 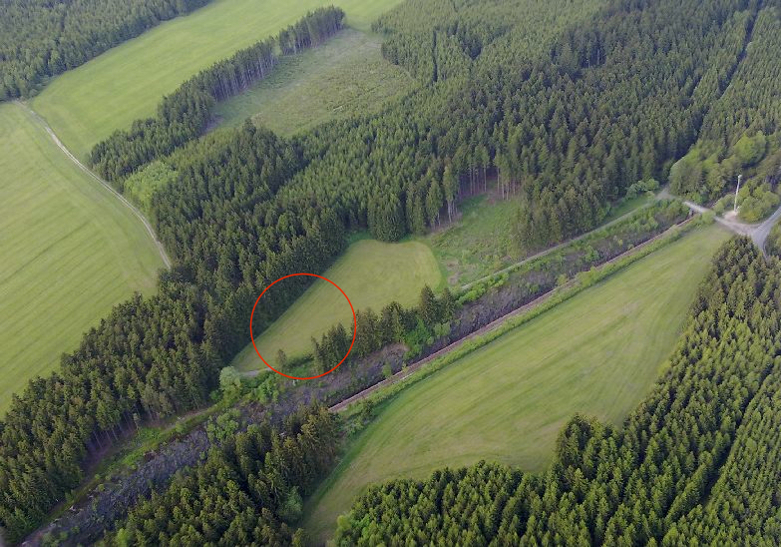 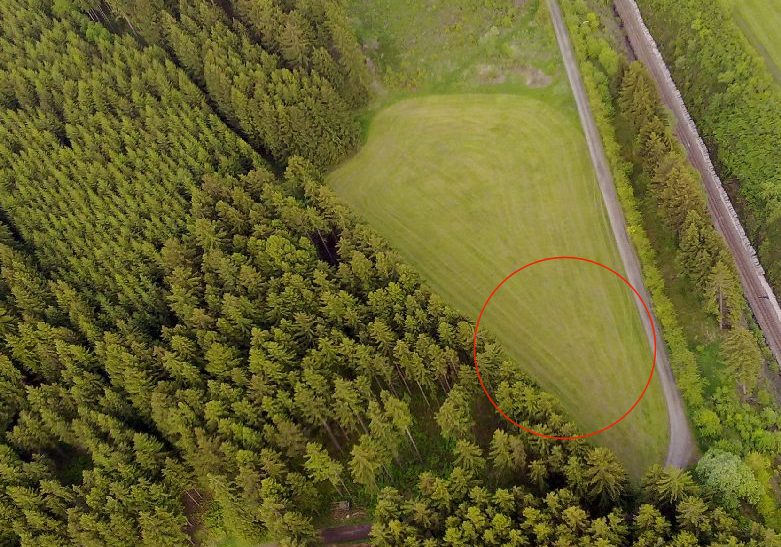 Our main burner was then fired up and we could take off. After a short time the basket lifted off the ground and the anchoring ropes became taut. Frank and I then stood diagonally opposite each other in the basket and cut the ropes at our respective corners. Up until then everything had gone smoothly but then came our first problems. I had been a little quicker than Frank in cutting my second rope which the balloon was still hanging on by one rope and listing to one side. This also resulted in the burner tilting and the flame being directed onto the material which by now had caught fire. Furthermore, the last anchor in the ground was ripped out and catapulted upwards, hitting Frank squarely on the head. Blood was now running down his face. Luckily we had a fire extinguisher with us so Peter simply needed to reduce the flame whilst I put out the fire. Frank’s injury turned out not to be serious after all so we could press ahead without further ado.

One problem had now become visible which I had not considered. The burner’s flame lit up the inside of the balloon brightly and I could discern a hole at the top, right in the middle.

What had happened?
As I had finished the balloon I tied all the ropes connecting it to the basket into a knot. This knot was positioned at the central point in the balloon and I then simply sewed a canopy over the top. However, the heavy load had caused the knot to tighten up dramatically leading to the canopy being torn away.The consequence of this hole immediately became clear - we had to have the burner on continuously. 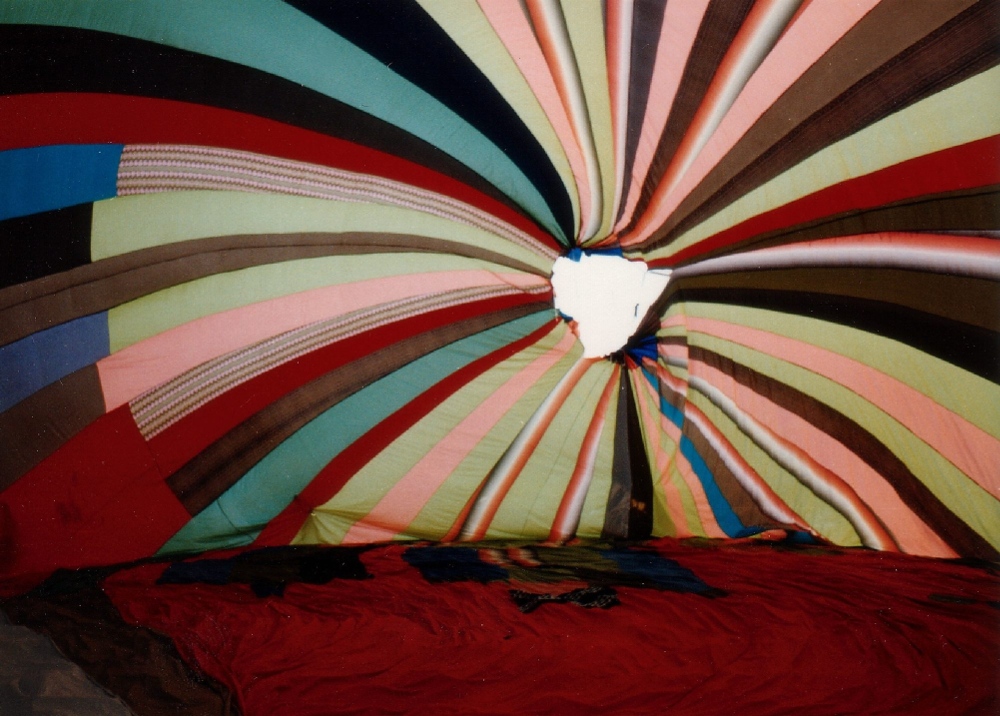 This hole appeared in the balloon immediately after the launch.

In spite of this hole we succeeded in climbing further and further into the sky, reaching an altitude of 2000m above the ground. Here we experienced the expected 50km/h wind and could make some rapid headway. Since it was the dead of night we could only make out a very few lights on the ground which were switched on at 2:30am. We were not able to discern the course of the border at all or the lights which would have illuminated it; this surprised us greatly. Navigation was made extremely difficult if not impossible and this was exacerbated further because the balloon had fully rotated several times. We soon lost our bearings entirely.

It was a quiet yet tense mood in our basket. There was no trace of fear or panic and the only thing which disturbed the silence was the noise of the burner which had to run continuously.
Suddenly search lights were directed at us from a brightly lit area but their beams did not reach us. We suspected and later confirmed that they were searchlights from the Rudolphstein border crossing on the A9 motorway but due to our altitude and considerable distance from where the lights were positioned we were not in any danger.

After this fright we had our next surprise, the flame on the burner went out. We thought it was due to the gas supercooling as we continually had to heat the air in the balloon, and also the outside air temperature which was around -8°C. We tried several times to restart the burner but only succeeded in doing so for very short bursts of time. Eventually we had to give up because it had become obvious that we were out of gas. Now we could only go downwards and descended rapidly from our altitude of 2000m.

I was aware that it could all go horribly wrong so I took out our landing light. This would normally have been an additional headlight for the car and I shone it on the area around us hoping we could attract someone’s attention and therefore be found. A few moments later I saw some treetops swaying underneath us and then there was a crash – we were once again on the ground. 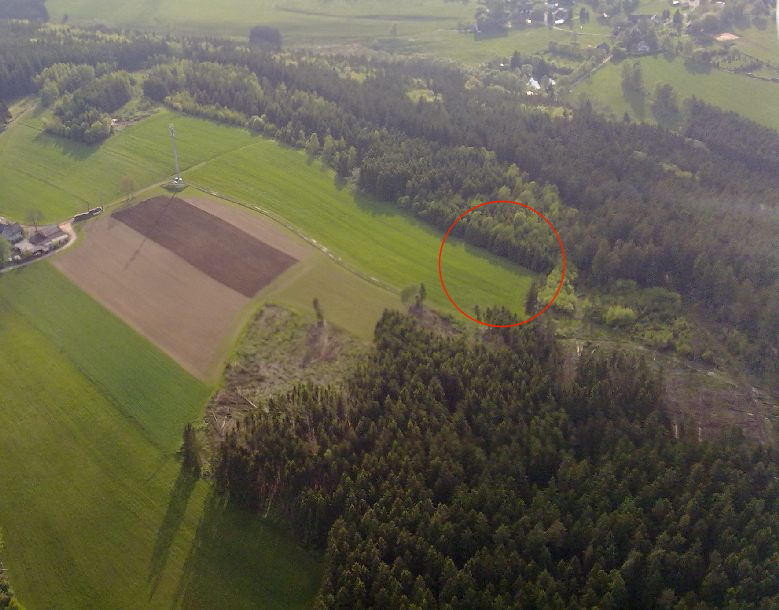 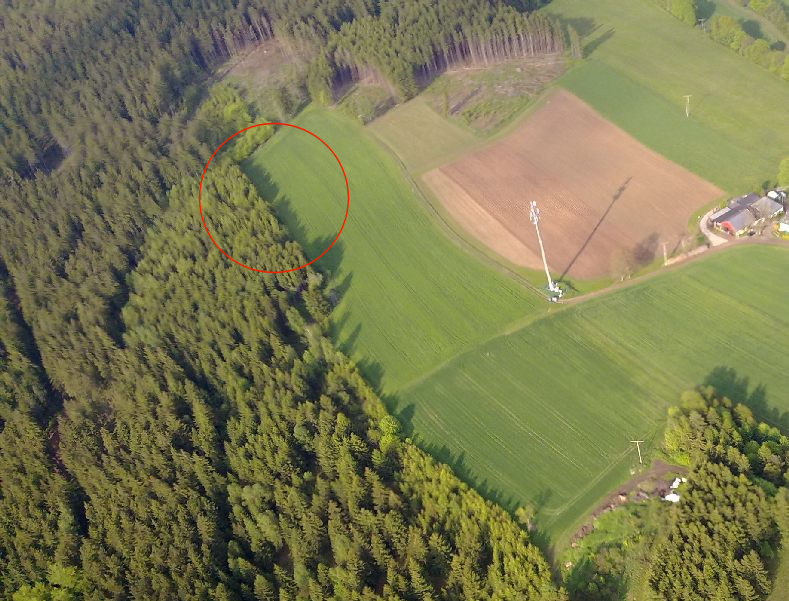 The small dashed gray line in the map shows the former border of between the both German states. Today she is the border between the federal states of Thuringia and Bavaria.

We all managed to get out of the basket with our own strength so it was obvious that nothing had happened to us. Well… we were actually very lucky.

Now we had our next problem. We did not know if we had been successful in escaping and whether we really were in the West. We therefore decided to move in a southerly direction; if we had succeeded then we would be moving even further away from the border and if we hadn’t we would be heading straight into the open arms of the East German border guards. This did not matter to us anymore as they had seen us in the air and would have caught us anyway. I must admit that we were absolutely exhausted after the landing and due to the uncertainty as to whether we had succeeded this was our lowest point.

The full moon that night allowed me to notice that we had passed over several small fields. That would have been unusual for East Germany because much larger fields were the norm there. With that came the hope that we could indeed have succeeded. We then came to an electrical pylon and read a sign that was fixed to it. It said something about Überlandwerk which we had also never seen in East Germany. After moving on a little further we reached a farm. The women and children hid themselves in the bushes whilst Peter and I went on. In the barn we saw a piece of farm machinery and because of its type it was now clear that we had indeed escaped successfully. 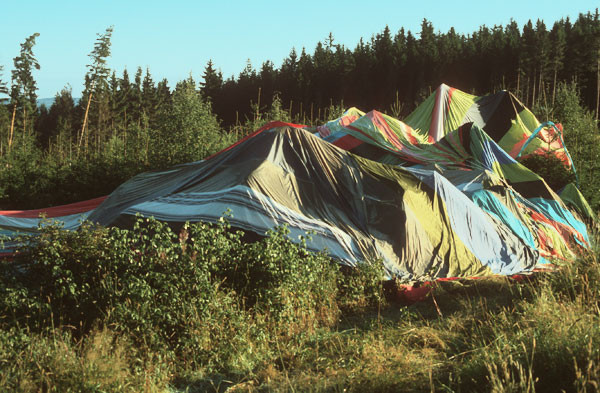 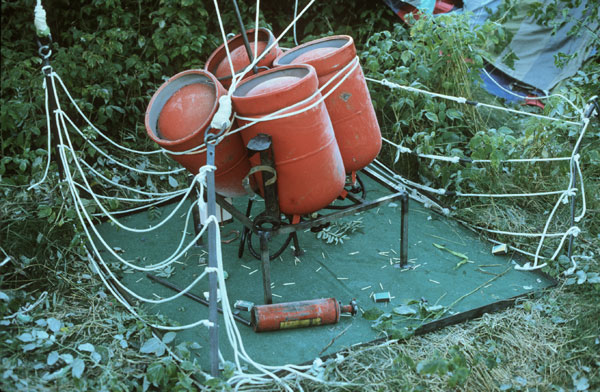 As we left the barn a car suddenly appeared and approached slowly. We walked onto the road in front of the car in order to make ourselves visible and it stopped. Two policemen got out, two West German policemen and it became clear again that we really had done it.

One of us asked “Are we in the West?” but this question was redundant because that was already obvious. The policemen answered astonished “Of course you are, where else would you be then?”. No one could scarcely imagine that East Germans would just appear out of nowhere in the middle of the night 10km away from the border.

After this greeting we let off a firework that we had brought with us to signal to our wives that all was well. They came to us straight away with the children and the joy was extreme!

We had done it! We had made it to the West!

In the following chapter I will explain how we fared after our escape.